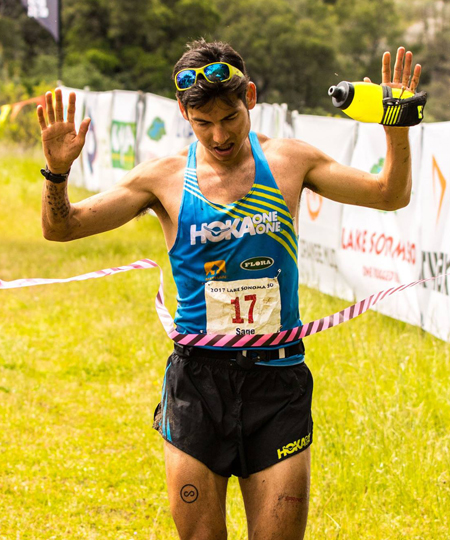 Sage Canaday, an Oregon Native, is an accomplished runner in multiple disciplines on both the trail and the road. He attended Cornell University and at the age of 21 was the youngest runner at the 2008 Olympic Trials Marathon. The same year, Sage won the Ivy League 10,000 meter Championship.

Canaday began his pro career running the road marathon as part of the Hansons-Brooks Distance Project setting personal bests at the half marathon in 1:04:32 and in the marathon 2:16:52

2012 brought significant changes for Sage, as he burst on the Ultra Scene dominantly in the mid-distance Ultra Running events with a focus on trails. In his Ultra debut he placed 2nd at the Chuckanut 50k and won the UATF Mountain Running Championship. In 2014, his success continued with victories at the USATF 100k Trail Championship, Speedgoat 50k, Lake Sonoma 50 Mile, Cayuga Trails 50 and Tarawera 100k.

2014 brought continued success on the trails with victories at the North Face 50 Mile, Speedgoat 50k and Pikes Peak Ascent.

In 2015 he sought to refocus on the road marathon placing 8th among Americans at the Los Angeles USATF Marathon Championship and 16th overall at the Boston Marathon. Sage also traveled to the largest Ultra Race in the World, the Comrades Marathon placing 15th in a field of 25,000 taking place on the paved road between the cities of Durban and Pietermaritzburg, South Africa.

Sage looks to continue competing at a high level on the roads and trails at distances from the 10km to 100 miles now and in the future.